You are: Home » British coins » Articles » Britannia - The Spirit of a Nation

Britannia - The Spirit of a Nation

As the Roman Empire expanded, subjugated provinces were personified with female figures in a bid to establish order and create a sense of political unity. A warrior seated on rocks with a spear in her hand, Britannia first appeared on the coins of the Emperor Hadrian more than 2,000 years ago. When the Romans left the shores around 400 AD, Britannia vanished with them, only to experience a cultural revival during the reign of Elizabeth I. A return to coinage followed in 1672 as Charles II sought to inspire the British people by depicting this stirring symbol on the farthing and halfpenny, bolstering his claim to lordship of the seas. She's been a fixture on Britain's coins ever since.

Britannia and the Romans 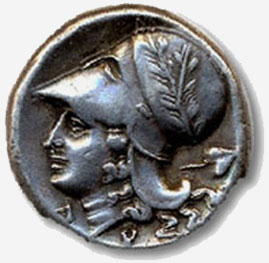 The tradition of using the image of a powerful woman to depict a country goes back centuries. Even in pre-Christian times, the city of Athens was personified by Athena, the Greek goddess of wisdom and war.

The Romans also used strong maidens to personify their territories and conquests. When they invaded Britain, they used Britannia to depict the colonised country on their coins.

Britannia first appeared on Roman coins around 119 AD, during the Emperor Hadrian's reign. Hadrian spent most of his reign touring the Roman Empire and strengthening its borders. The wall that he ordered to be built on the Scottish borders still bears his name today.

Hadrian's Britannia wore flowing robes and held a spear and shield. She was seated on rocky crags, which probably represented the invaders' first view of the island.

On Hadrian's coins, Britannia looked like she was being held captive. The writer Marina Warner compared her to a pensive, even forlorn goddess... fallen before the might of the Roman Empire.

She seems to have an enduring, and one might say endearing, quality. As a design on a coin when seated, she quite simply fits into the circular shape. The designs tend to have consistent elements: a lance, a helmet, a lighthouse, some waves, a few details to be tinkered with and reapplied. This made her instantly recognisable, and provided a valuable sense of continuity. She was a constant, and a symbol of stability.

A symbol of the mastery of the seas

Britannia didn't appear on British circulating coins again until the 1672 - 14 centuries after the Romans had left our shores. This time she was a useful symbol for Charles II.

Yet this Britannia wasn't a warmonger. The olive sprig in her right hand symbolised her love of peace. It also harked back to the ancient past. Legend had it that Athena gave the first olive tree to her city of Athens.

In modern times, Britannia remains the universally recognised personification of Britain. She still stands proud on our coins today, and features on some of the United Kingdom's highest denomination coins.

Britannia first appeared on coins back in the Roman era. In the second century AD Emperor Hadrian introduced a number of coins that depicted a female figure who personified Britain, with the label BRITANNIA. When the Romans left Britain in the early 400s, Britannia vanished from coins and wasn't to appear again for several centuries. In fact it wasn't until Elizabeth I's reign in the 1600s that Britannia started to play a part in national life once more. She featured in contemporary drama and literature, symbolising the growing maritime empire of the Tudor queen.

In 1636 the legal scholar John Selden argued that Britannia proved Britain's claim to the seas around her. He said that Britannia had been shown on Roman coins seated amidst the waves, portraying our naval strength. Perhaps that was why that Charles II chose to reintroduce Britannia onto our coins in 1672. Britain's maritime strength was under threat and the king hoped that Britannia would inspire the nation.

Since her reappearance in 1672, Britannia has never been absent from the nation's coins. Over the years she became more and more associated with the sea. On the famous cartwheel pennies and twopences of 1797 she was shown seated on rocks in the sea, with a ship in the background and her spear replaced by a trident.

Britannia continued to reign supreme on the copper and bronze coins of every monarch. When the UK switched to decimal coinage in 1971, Britannia appeared on the definitive 50p coin. Her lasting presence on our coins made her the perfect choice when The Royal Mint was choosing a subject to appear on coins for the international bullion markets. She was an appealing and distinctive figure that was also instantly recognisable as British. She featured on the first gold Britannia coins in 1987 and on the first silver Britannia coins in 1997.

She continues to be reinterpreted by different artists to this day, with different aspects of her nature and symbolism emphasised to reflect the times. She also remains a feature of the coins we use every day and her image graces the current definitive £2 coin.