Below provide images of every major design type of the Tudor sovereign.

The designs for all sovereigns struck in fine gold consist of an enthroned portrait and a shield of the Royal Arms set against a Tudor rose. But the first issue of 1489, of which only a couple of specimens are known to survive, is highly distinctive – both for the simple background on the obverse and the large crown above the shield on the reverse.

In the past it has been broadly accepted that the sovereign of the second type, with its field liberally scattered with fleurs de lys, was struck in connection with the French expedition of 1492. But this seems less likely in the light of recent work. 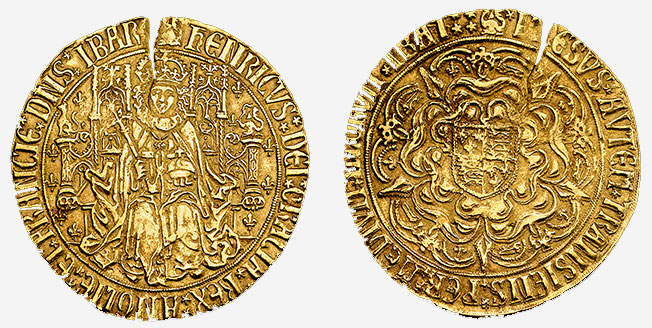 Perhaps the most distinctive features of the third type are the greyhound and dragon standing on the pillars of the throne. The dragon was Henry's badge at the battle of Bosworth Field and is said to have been the ensign of Cadwaladr, 'the last king of the Britons', from whom Henry claimed descent.

Coins of the fourth type, all struck from a single pair of dies, are the least rare of Henry VII sovereigns.

The portcullis of the House of Beaufort, a symbol of the Tudor dynasty, was inserted below the enthroned portrait on the fifth type. Henceforth, the basic lay-out of the design would change very little on the fine sovereigns of Henry VII's successors.

A unique sovereign of Henry VIII with a mintmark showing the sun breaking through clouds survives in the British Museum. Numismatists have long suspected that this highly distinctive mintmark, located at the start of the inscription on both sides of the coin, may be in some way connected with the birth of Henry's long-awaited son on 12 October 1537.

An extreme rarity held in the Royal Mint Museum is a double sovereign of the special Southwark issue of 1551. In essence, the coin is a piedfort – of double weight but standard diameter. The assumption is that these double sovereigns were intended as especially prestigious presentation pieces.

The only other Tudor sovereign of which piedforts are known is the final type of Henry VII.

A number of the sovereigns issued by Mary I bear the date 1553 or 1554 in roman numerals at the end of the obverse inscription. They are the only Tudor sovereigns to be dated.

On many of the later sovereigns of Elizabeth I, the tressure surrounding the portrait continues up to the queen's head rather than stopping at the sides of the throne. Although this change may seem inconsequential, it attracted full-throated criticism from one numismatist in the 1930s who described the result as being 'both inartistic and incorrect... [as] the tressure is made to pass between the Queen's head and the back of her throne!'

Sovereign issues of the Great Debasement

For the debasement sovereigns, the traditional shield-on-rose reverse design was abandoned in favour of a shield of the royal arms with lion and dragon supporters, with a monogram HR in a panel below.

A slight reduction in the diameter of the coins in 1544 required some modification of the design, most obviously the removal of the tressure surrounding the enthroned portrait.

While retaining the enthroned portrait, the sovereigns of Edward VI are distinctive for showing the king wearing doublet and hose instead of robes, and holding a sword instead of a sceptre.

Sovereigns struck in crown gold after the Debasement

Bearing a half-length portrait, the crown gold pieces of Edward VI are the first sovereigns not to carry an enthroned effigy of the monarch.

A remarkable portrait of the queen with long, flowing hair and a highly ornamented dress appears on the crown gold sovereigns of Elizabeth I.

With the accession of the Stuart dynasty, the Royal Arms were amended to incorporate the Scottish lion rampant and the Irish harp in the second and third quarters.

With its enormous size and magnificent designs, the new sovereign constituted a remarkable addition to the English coinage. For the first time the pound sterling, in use for centuries as a denomination of account, was given material expression in the shape of a single coin.

For all that the sovereign may have performed some economic function as a large and impressive store of wealth, it is unlikely there was a genuine monetary need for a piece of such high value. The main stimulus for the new coin was probably political, the purpose being to add lustre both at home and abroad to the image of the new Tudor dynasty. Indeed the sovereign may well have appeared in 1489 precisely because it was in that year the Tudors gained effective international recognition in the Treaty of Medina del Campo – by which Henry VII's son and heir, Arthur, was to marry a Spanish princess.

The sovereign was probably intended, to some extent at least, to serve as a presentation and ceremonial piece. Certainly there are two cases recorded of sovereigns being used as diplomatic gifts: the first from May 1502 when 16 pieces were given to ambassadors from Hungary; the second from February 1506 when 40 pieces were presented to members of the household of the king of Castile.

There are five different types of Henry VII's sovereign and the denomination seems to have been coined periodically through the reign on a limited scale, even if perhaps an original provision that two were to be struck from every pound of gold may not always have been carried out.

Sovereigns were issued as part of the first and second coinages of Henry VIII but production seems not to have been continuous. In particular, it seems that no sovereigns were produced in the decade or so after 1526.

The sovereign was revalued first to 22 shillings, then 22s 6d, as part of a currency reform engineered by Cardinal Wolsey intended to align the values of English coins with those from the Continent.

In a shocking episode seen neither before nor since, the Great Debasement witnessed the systematic exploitation of the coinage for the profit of the crown. Gold was not so badly affected as silver but nevertheless the worst debased gold coins contained in effect only three-quarters of the gold in pre-debasement issues.

Temporary mints were opened to facilitate the debasement. In addition to the Tower, debased sovereigns were struck at establishments in Southwark and at Bristol Castle.

Apart from the special issue referred to below, all sovereigns struck during the debasement were denominated at 20 shillings.

In the first half of the year, a small number of sovereigns of pre-debasement weight and fineness were struck at the Southwark mint. Formally denominated at 24 shillings, the coins would have been significantly undervalued for the purposes of circulation. But the strong suspicion is that this issue was intended for the personal use of the king.

The policy of debasement was finally abandoned in October 1551.

Two different coins bearing the name of sovereign were struck in the latter part of Edward VI's reign: a fine sovereign at the pre-debasement standard, essentially the same as the special issue of early 1551 except that the coins were now denominated at 30 shillings; and a smaller sovereign in crown (22 carat) gold with a value of 20 shillings.

The seventeenth-century diarist, John Evelyn, appears to provide an example of sovereigns being used in a ceremonial context. In his 1697 work, Numismata, he records that Ryals of broad gold were scattered at Mary I's coronation – but his illustration and the accompanying description are clearly of a sovereign rather than a fifteen-shilling ryal.

Fine sovereigns were issued by Mary I.

Fine sovereigns were issued by Elizabeth I.

Fine sovereigns were struck for the last time, although it should be noted that the coins were formally described in the authorising commission as 'double nobles'. Up until 1587 at least, the coins produced were apparently intended for circulation in the Netherlands – where the premium paid on English fine gold coins resulted in a small profit.

After an absence of forty years, the crown gold sovereign was revived in June 1593. Henceforth a coin of 20 shillings (or thereabouts) would remain a regular part of mint output.

The weight of all coins was slightly reduced to accommodate a modest increase in the mint price for bullion.

The crown gold sovereigns issued at the start of James I's reign were the last coins to bear the name for more than two centuries. Gold coins of 20 and 30 shillings were issued in the years that followed – but they were now known as unites and rose ryals.