This is the most famous penny of the last 150 years and was one of the most sought-after bronze coin in the world for several decades. Because most of the 1932 pennies were still not released into circulation, the 1933 penny was not produced in large quantities. Less than 15 are known to exist, including the one that was stolen and disappeared in August, 1970. James Mackay wrote in his book A History of Modern English Coinage, these coins were struck for...

...inclusion in year sets interred under the foundation stones of public buildings, and only one or two are believed to be in the hands of private collectors.

At least 3 proofs, ordered by King George V, were produced and they were placed under these buildings:

At least 4 circulation strikes were produced, one in British Musuem, one owned by the Royal Mint Museum at Llantrisant in South Wales and at least 2 into private hands.

Interest in the 1933 penny reached a fever pitch following World War II. The German bombing campaign had razed many buildings in London and an urban legend developed that a number of these rare coins had entered into circulation. Generations of treasure hunters undoubtedly gave a second glance at their change before spending any old penny. 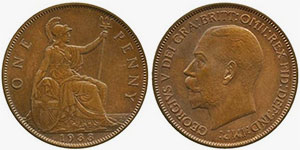 At least 4 patterns strikes were produced to test design changes. Dies from previous years, when worn and in a very late die state, produced a progressive design transfer of the monarch on the reverse of coins. The design changes were tested to avoid this ghosting effect.

These patterns (some are uniface) were produced by André Lavrillier with a modified George V head, reverse design and with Lavrillier's initials. 2 belong to the British Museum Collection.

Just as with the currency version, the Copper Pattern Penny is extremely rare - in fact, only four are known to exist: one is in the Royal Mint Museum, and the other three are in private hands. Of those in private hands, one is now available to buy at our London Auctions in May.

The existence of these Pattern Pennies has never been fully published until now, and after much research and collaboration (we are indebted to Mr G P Dyer of the Royal Mint Museum for his contribution), we can now authoritatively state the reasons for their presence amongst the numismatic elite.