You are: Home » British coins » Articles » Sir Isaac Newton, Warden of the Mint 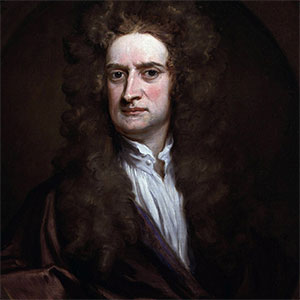 Isaac Newton was appointed to a position in the Mint in the spring of 1696 on the recommendation of the Chancellor of the Exchequer Charles Montague. At first sight this may seem a somewhat curious, even backward, step for a man in his early fifties whose life had been spent in the academic surroundings of Trinity College, Cambridge. Public office was something new to him, but it was actually something that he had sought, and so the offer of the position of Warden of the Mint would not have been unwelcome.

The Mint was then in the Tower of London and it was accordingly to the Tower that Newton came in April 1696 to take up his new duties. It was a time of great activity. The Mint was grappling with the recoinage of old silver coins that dated back to the reign of Elizabeth and even to earlier reigns. Auxiliary mints were being set up in various parts of the country, and Newton was quickly caught up in the pressure of the moment. The operation was completed within three years, leaving Newton more time to devote to his main duty of investigating and bringing to justice those who clipped and counterfeited the coin of the realm.

Master of the Mint

In 1699 the post of Master of the Mint fell vacant and though technically less senior than that of Warden it was more lucrative since the Master acted as a contractor to the Crown, profiting from the rates at which he put the work out to sub-contractors. The post was offered to Newton and he took up his duties with effect from Christmas Day 1699, his fifty-seventh birthday. Surviving the political upheavals of the early eighteenth century, he remained as Master until his death in March 1727 and for the last thirty years of his life he therefore occupied high position in the Mint. Even after the completion of the recoinage of the 1690s there was much to do. Coins and coronation medals had to be prepared following the accession of Queen Anne in 1702, and then came the coining of the booty from Vigo Bay in 1703. In 1707 the Union of the Kingdoms of England and Scotland required the assimilation of the old Scottish coinage to that of England as well as the methods of the Edinburgh mint to those of the mint in the Tower.

Shortly before the end of Anne's reign came abortive preparations for a new coinage of copper, and then in 1714 coins and medals were needed for George I - the first of the Hanoverian Georges. Copper coinage was finally resumed in 1717 and later, in the 1720s, the Mint supervised the execution by a private contractor of a controversial copper coinage for Ireland. To these demanding matters were added more fundamental problems about the relative roles of gold and silver in Britain.

It was plainly a time when, if Newton chose, there were important questions requiring his supervision and judgement, practical control and administrative skill and there is no doubt that he took an active involvement in the affairs of the Mint. He is known to have himself conducted interviews with criminals and informers; he was present when treasure from Vigo was brought into the Mint; the Scots acknowledged with gratitude the friendly assistance they received from him after the Union; a report he wrote in September 1717 paved the way for a reduction in the value of the guinea to the familiar twenty-one shillings; and he supervised experiments on the purity of copper, some believing that he may even have carried out his own assays of gold and silver. Above all, however, the evidence of his activity is there to see in the hundreds of surviving draft reports and letters, written in his own hand and often many times over.

Indeed, he so occupied himself on such matters that the Mint may be blamed for a resulting loss to science. Professor Levy, for instance, observed that the moment he stepped into the Mint his creative scientific work ceased, and Newton himself used the explanation of being about the King's business to justify the change of direction. But the decision was his own and he abandoned science without regret, dismissing it as relatively unimportant. So even if he had taken more leisure from his Mint duties, it seems likely that the time gained would have been spent on ancient chronology and Biblical prophecies, arguably the least useful of his writings. To put it bluntly, he had grown too old for genuine creativity.

The survival of Mint traditions

Newton's long term contribution to the Mint nevertheless seems in retrospect to be small for the greatest mind of the age. Such a view does not conflict with Charles Montague's assertion that the success of the recoinage of the 1690s was due in no small measure to Newton's able administration, but it runs counter to the claim of the historian Macaulay that Newton speedily produced a complete revolution within the Mint. On the contrary, he left the Mint in 1727 very much as he found it thirty years before. Good administrator he may have been, but he was no innovator and he was far more at home in the search for ancient precedent than in 'embarrassing initiative'.

The medieval organisation of the Mint was accordingly left intact. Even someone of Newton's stature could not impose change without the willing co-operation of his colleagues with whom I find it sometimes difficult to agree. With Hopton Haynes, eventually King's Assay Master, he got on well, while Sir John Stanley, his successor as Warden, appears to have been cheerful and good natured, but there were disputes with others, among them a later Warden, the more hot tempered Craven Peyton. And Newton himself, as Professor Stephen Hawking says frankly, was not a pleasant man. Irritable and disagreeable, of the most fearful, cautious, and suspicious temper in the words of a contemporary, he could be insensitive and unbending, lacking the tact to manage by persuasion.

Newton's impact on the Mint

Yet if there is no major reform of the Mint with which his name can be associated, there was nevertheless a real and positive contribution. It is a contribution which shows itself especially in a concern for accuracy, with Newton wanting coins to be made of the correct weight and fineness, varying as little as possible one from another. Early in his Mastership a journey of gold coins was rejected for being badly produced and, later, half a ton of copper coins suffered the same fate, since, as he said, I can get nothing but discredit by coining the moneys ill. Such accuracy was unprecedented and, with justice, Newton claimed that he had brought the coinage to a much greater exactness than ever was known before, & thereby saved some thousands of pounds to the government. In these circumstances it is no wonder that he reacted angrily in 1710 to the mistaken judgement of the jury at the Trial of the Pyx that his gold coins were below standard.

A second aspect of his contribution is his undoubted industry. Although he had an able deputy, first in John Francis Fauquier and then at the end of his life in John Conduitt, he chose not to delegate everything, providing a welcome change from his predecessors and from some of his colleagues. And finally, and more important still, there is his integrity. Scrupulously exact and regular, he was an honest and respected man who cared for his reputation and who, as in his scientific disputes with Flamsteed and Leibniz, passionately resented reflections on his moral integrity. He is said to have refused a bribe of over £6,000 in connection with contracts for a coinage of copper, and there can be no doubt that he set a high standard at a time when corruption was rife.

Raising the status of the Mint

In consequence Newton raised the status of the Mint by his presence and by his behaviour. He secured a place for the Mint in the highest counsels of the realm and his evident interest in minting affairs, sustained over thirty years, gives the present generation of Royal Mint officers particular reason to be proud of him. He is indeed a distinguished part of a distinguished history.