You are: Home » British coins » Articles » Sketch of Edward VIII by Humphrey Paget

When, early in 1936, a new portrait of Edward VIII was required for coins and official medals, Robert Johnson, the then Deputy Master of the Mint, helpfully arranged a sitting with the King at Buckingham Palace for two artists. Humphrey Paget was one, the letter of invitation from Johnson suggesting that he wore a black tie and any other raiment, coloured or otherwise.

Paget was later to win the commission for the new coinage effigy and the sitting undoubtedly helped since from it, as pictured here, he was able to generate a quick sketch of the King, clarifying his thinking with several notes on his own drawing. Recently acquired by the Mint Museum, the sketch is an important addition and is all the more charming because Paget drew it on the back of his letter of invitation from Johnson. 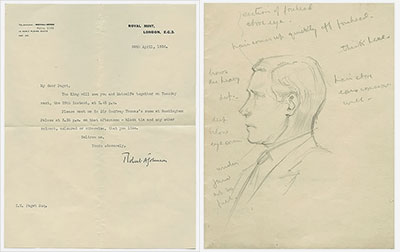 The great rarities of the Mint collection are the proposed coins of Edward VIII. He was king of Britain for eleven months in 1936 and during that time preparations were made for a new series of coins bearing his portrait. No coins were released in Britain for general circulation but a limited number were produced by the Mint before the king abdicated in December 1936 and these coins, from five-pound pieces in gold down to farthings, have been preserved in the Mint collection.

A tradition has developed since the time of Charles II of successive monarchs being represented on the coinage facing in the opposite direction to their immediate predecessor. Edward VIII, however, had a particular fondness for portraits of himself facing to the left, even though tradition dictated that he face to the right. The king had his way and the proposed coins in the Mint collection show Edward VIII facing to the left. The tradition has, however, been restored since the reign of George VI.

Edward VIII took a personal interest in the designs that were to be placed on his coins and he was concerned to find alternatives to the traditional heraldic approach. A series of designs was produced on the theme of royal animals, including a stag, an eagle and a sturgeon, and the wren farthing, which later formed part of the coinage of George VI, was originally intended as part of this series of designs. Despite these efforts heraldry won through as the chosen approach.