You are: Home » British coins » Articles » The History of the Gold Sovereign

The History of the Gold Sovereign

A New Money of Gold - The First Gold Sovereign 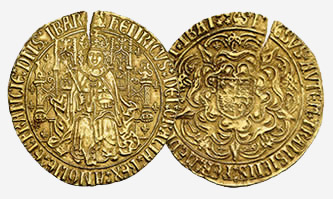 On 28 October 1489 King Henry VII instructed the officers of his Royal Mint to produce a new money of gold. England had by then enjoyed a circulating gold coinage for almost a century and a half but the new coin was to be the largest coin yet seen in England, both in size and value, and was to be called a Sovereign. It well merited such a splendid name, the obverse boasting an enthroned portrait of the king in full coronation regalia and the reverse depicting the royal arms, crowned and superimposed on a magnificent double rose to symbolise the union of York and Lancaster after the long-drawn-out War of the Roses.

Large and handsome, it was clearly intended to augment the dignity of the king and to propagate a political message of stability and prestige rather than to fulfil any commercial or domestic need. As such, it was struck in turn by each of the Tudor monarchs, its issue coming to an end early in the reign of James I. A Sovereign was not to appear again for 200 years.

Following the defeat of Napoleon at Waterloo a great reform of the coinage was undertaken and gold was adopted as the sole Standard Measure of Value. At first it was intended to re-introduce the 21 shilling guinea but it was found that a very general wish prevails among the Public in favour of a Coinage of Gold Pieces of the value of Twenty Shillings and Ten Shillings, in preference to Guineas, Half Guineas and Seven Shilling Pieces. Hence a new gold 20 shilling coin was born and given the old name of Sovereign.

Almost half the weight and diameter of the original Sovereign, the new gold coin of 1817 more than matched its predecessor in the beauty of its design. The traditional heraldic reverse was abandoned in favour of a St George and the dragon of classic beauty by the Italian engraver Benedetto Pistrucci.

The kings portrait on the 1817 gold Sovereign was also the work of Benedetto Pistrucci.

The design combined such grace and dramatic impact that it set the new Sovereign apart from every gold coin that had gone before and it may be difficult to understand why, in 1825, it was dropped in preference of a more conventional royal arms

Happily, in response to criticism of the poor state of numismatic art, it was revived in 1871 and dragon and shield Sovereigns, both bearing the charming Young Head of Queen Victoria, ran alongside each other until 1887.

That year, coinciding with Queen Victoria's Golden Jubilee, new designs appeared on the gold and silver coinage but only Pistrucci's St George was approved for the reverse of the Sovereign, it being sanctioned said the Chancellor of the Exchequer, by tradition and recommended by the great beauty of the design.

It was not until 1893, however, when Thomas Brock's Old head replaced the Jubilee Head on Queen Victoria's coins, did Pistrucci's St George finally grace the reverse of the Half-Sovereign. There may have been good practical reasons for adopting St George in place of the usual royal arms, but perhaps aesthetic considerations may also have played a part, for many would agree with the critic in the London Illustrated News who declared the new Half-Sovereign of 1893 vastly pretty... by far the most artistic Half-Sovereign I have yet seen.

Its popularity has been bourne out by its presence on the Sovereigns of every monarch since. When minting of Sovereigns resumed in the present reign there was no thought of its replacement. It therefore appeared on every bullion Sovereign of the twentieth century relinquishing its place only three times in the Queen's reign – in 1989 for the special commemorative coins celebrating the 500th anniversary of the original Tudor Sovereign, in 2002, the Queen's Golden Jubilee year, and again in 2005.

Pistrucci's St George and the dragon continues to reign supreme on the gold Sovereign family, recognised as a symbol of uncompromising standards and minting excellence. It graces all five coins in the Sovereign family of 2011; each coin has been manufactured using original master tools and therefore displays Pistrucci's dynamic masterpiece in all its original glory.

The immediate origins of both the image and legend of St George the Dragon Slayer lie in Near Eastern survivals of Graeco-Roman culture where the hero/victor image of a mounted lancer was widely used on coins and reliefs and was also employed as an imperial sign of power.

The attachment to the cult of the Christian martyr, the third-century military commander George of Cappadocia, was a direct result of the First Crusade: the vision of St George joining in the Battle of Antioch in 1098, recorded by William of Malmesbury in Gesta Regum, established a vigorous cult of St George among the crusading knights, with the shrine of the saint at Lydda – situated in the area held in Greek mythology as the location where hero Perseus rescued Princess Andromeda from an evil sea serpent – becoming a place of special veneration for them.

By the thirteenth century St George the Dragon Slayer had gained the red cross of a crusader as part of his iconography and, representing the victory of good over evil, became one of medieval Europe's greatest legends. In England, he became the national patron saint, and the chivalric cult of St George culminated in the Order of the Garter founded, in 1348, by Edward III with its official sanctuary in the Chapel of St George at Windsor Castle, and with its insignia containing the badge or jewel of St George slaying the dragon. 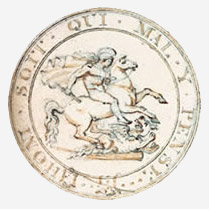 St George and the Gold Sovereign

St George slaying the dragon was the chosen subject for the new gold sovereign that made its debut in the late summer of 1817. Destined to become one of the world's best-loved coin designs, it was created by the Italian gem engraver Benedetto Pistrucci who had come to London in 1815 and whose subsequent association with the Royal Mint brought about something of a golden era in numismatic art.

Founded on a style inspired by classical Greece, Pistrucci's approach to the design represented a refreshing departure from previous gold coins whose style had been traditionally heraldic. It seems he may have found inspiration in the magnificent Elgin Marbles, the beautiful marble carvings that Thomas Bruce, the 7th Earl of Elgin, brought to England in the early 1800s.

The ornamental frieze originally decorated the Parthenon in Athens and displayed some 400 human figures and 200 animals that seemed to be taking part in a lively procession. The horsemen provide a wonderful impression of movement, their face and body expressions conveying a sense of skill and confidence, as they easily keep their horses under firm control.

Pistrucci's St George is strongly reminiscent of these marble relief sculptures, his horse adopting an aggressive attitude towards the wounded dragon yet effortlessly kept in check by his master. His design of a naked Greek horseman mounted on a Parthenon-style horse is, indeed, one of great classic beauty and many would still agree with Humphrey Sutherland who, in his book Art in Coinage (1955) declared it one of the noblest innovations in English coin design from 1800 to the present day. To the delight of collectors, artists and historians, it continues on the gold sovereign to this very day.

Benedetto Pistrucci was born in Rome on 29 May 1784. He came to London in 1815 under the patronage of the Prince Regent. His reputation as a gem engraver of outstanding ability had gone before him and, on his introduction to the Master of the Mint, he was commissioned to prepare designs for the new gold and silver coinage of George III.

Pistrucci engraved the coin portraits of both George III and George IV but is perhaps best known for his magnificent Waterloo Medal and his George & Dragon created for the new gold sovereign of 1817 and adapted for the gold five-pound piece and silver crowns of the same reign.

He remained in England for most of his life and died at his home near Windsor on 16 September 1855.

St George and the dragon

Pistrucci's interest in St George had been aroused by Lady Spencer to whom he had been introduced by Sir Joseph Banks, the President of the Royal Society and friend of William Wellesley Pole, Master of the Mint. Her Ladyship showed Pistrucci a wax model of St George and asked him to make another in the Greek style; Lady Spencer had no time for a figure dressed in gothic armour, a sentiment which could not fail to appeal to a temperamental Italian whose favourite maxim was said to be study Greek originals day and night.

The commission was duly executed and by all accounts it was Pistrucci himself who suggested St George and the Dragon as a suitable subject for the proposed new sovereign. The idea evidently appealed to Pole who agreed that the patron saint of England would undoubtedly prove an excellent and distinctive reverse for the new gold coinage. Thus for a reported fee of 100 guineas, Pistrucci undertook to provide a jasper cameo of St George, taking as his model an Italian servant in Brunet's hotel in Leicester Square, London. The result is a masterpiece of numismatic art, a coin design combining such grace and dramatic impact that it now ranks as one of the best loved and most enduring of numismatic designs.

A new design for the 2012 sovereign

The gold Sovereign is without doubt one of Britain's most famous coins: a coin so rich in history, it's considered by many as the flagship coin of the Royal Mint, and synonymous with Britain herself. The traditional St George and dragon design by Benedetto Pistrucci is replaced only on special occasions. The Queen's historic Diamond Jubilee is such an event, so the 2012 Sovereign features a brand new design for one year only.

Paul Day, British sculptor, currently living in France. The 2012 sovereign is Paul's first design for the Royal Mint. Paul's design was chosen from a number of designs put in front of the Royal Mint Advisory Committee as a result of a design competition including a total of five designers.

I have chosen to opt for a Romantic version of the St George and the dragon theme - a medieval knight of Arthurian legend rather than a classical hero. I have given the dragon a more threatening attitude and size, so that it represents a real menace and not a weak foe.

I have always been attracted to detail which requires a closer look to be unpicked and fully understood. I have deliberately left very little empty space. This is to make the reverse as engaging as possible and in complete contrast to the obverse.