You are: Home » British coins » Articles » The unique 1952 Proof Penny

The only kown 1952 british penny, submitted by Sovereign Rarities, a London-based coin dealer, was certified recently by NGC. This unique coin was graded Proof-64 Red and Brown. In 2016, Spink estimated the value of this coin at £75,000. This coin, according to NGC...

No circulation penny was struck in 1952 because there were already a large number of pennies in circulation at that time and because of the overall decrease in the demand for British pennies: The brass threepence became more popular and the inflation reduced the penny's purchasing power.

We are thrilled that our newest location in London has enabled us to certify amazing British rarities such as this unique 1952 penny. We look forward to continuing to serve the UK market and to doing all we can to ensure that important coins are recognized and protected.

In the 50's, few pennies were actually struck for circulation. 1950 and 1951 ones were mostly sent to the colonies and the 1953 penny was struck for the Queen's Coronation. In 1954, a unique example was struck for internal Royal Mint purposes. The Royal Mint redeemed surplus pennies from banks for melting starting in 1951, and by the end of the decade, about £1.2 million worth had been removed from circulation.

Very few coins are unique, so being part of the story of the 1952 penny is a once-in-a-lifetime role. 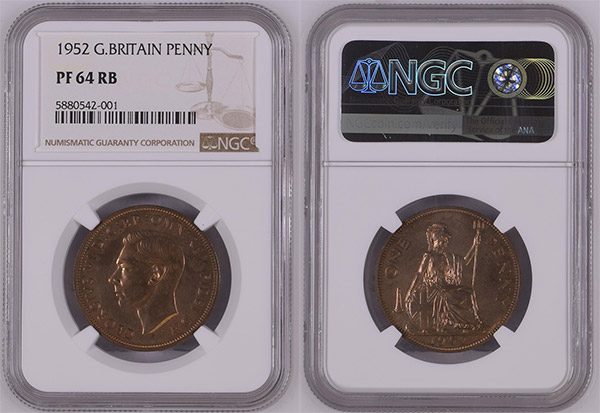