You are: Home » British coins » Articles » Weights and balances

Coins have to be produced accurately today as a defence against counterfeiting and so that they can efficiently operate vending machines.

When the British coinage was made of gold and silver and the face value of the coins was related to the actual amount of gold or silver they contained, making coins accurately was just as much of a concern.

That is why you will find in the Museum of the Royal Mint balances and sets of weights. 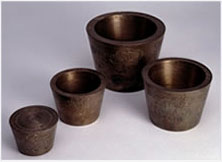 One set, known as a nest of weights because all the weights fit inside one another like Russian dolls, was made in 1707 during the reign of Queen Anne and will have been known to Isaac Newton during his time as Master of the Mint.

Another set dates from 1816 and is housed in a handsome wooden box secured by three locks.

Every element of this set speaks of the importance that was placed in the Mint on maintaining accurate measures of weight.

Such caution was indicative of the system of safeguards that operated within the Mint, whereby officials checked the activities of their colleagues.

Weight and fineness are important considerations for the Mint and the collection reflects this in its array of balances and trial plates. 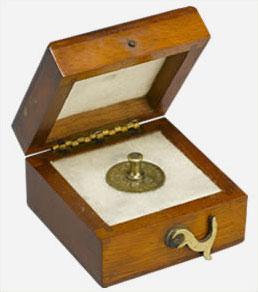 The double-florin weight illustrated here was made in 1887 by Oertling, a firm that was responsible for supplying weights and balances of the highest quality at the end of the nineteenth century.

The Victorian double-florin of 1887-90 is an often misunderstood coin, being wrongly seen as a concession to those who lobbied for a decimal coinage, whereas its true function was to encourage the use of silver over gold.

Ultimately it did not prove to be a particularly popular part of the currency but the care that was taken over the preparation of this box, and the verification marks on the weight, are ample evidence of the importance that nonetheless attached to maintaining proper standards.