You are: Home » British coins » Articles » Edward III 1343 Florin - One of the most expensive coin in the world

Listed in most top 10 most expensive coins in the world, only 3 examples of this medieval England gold coin exist. Also called Double Leopard, 2 of them are owned by the British Museum in London and both of them were found together by schoolchildren on the River Tyne in 1857. The obverse shows a full length portrait of King Edward III, seated on a throne, holding a sword and a scepter with 2 crowned leopards' heads on each site of him. Reverse shows small leopards around a cross with quatrefoil. 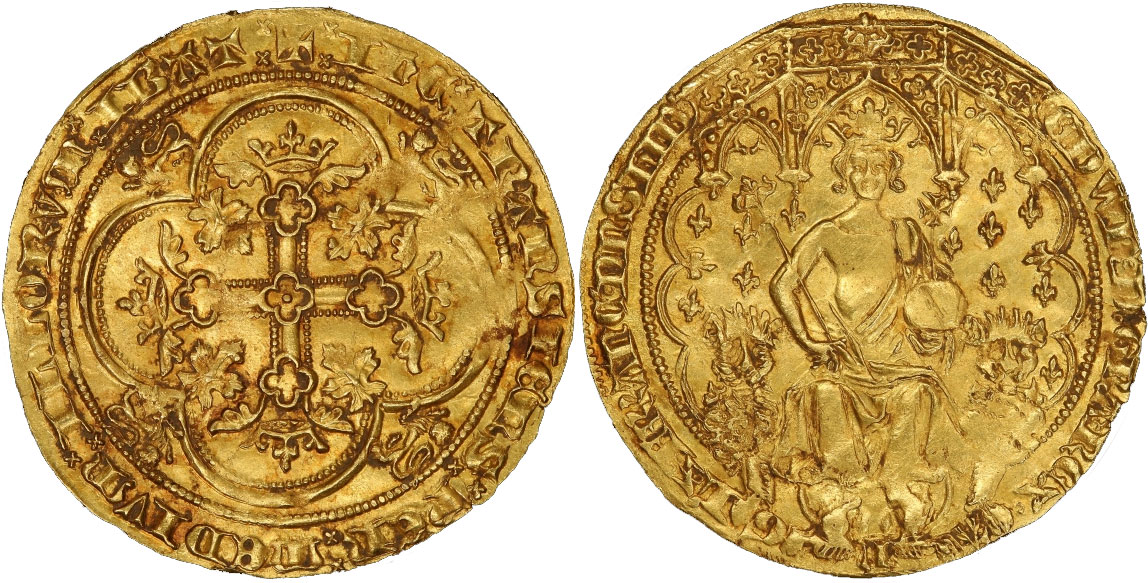 In June 2006, a metal detector found the 3rd one which sold the same year at a Spink auction for about £460,000 (was estimated at £150,000), a record for a British coin at that time. It was bought by dealer Ian Goldbart, managing director of AH Baldwin and Sons, for Avarae Global Coins, a global coin fund. Today, the value of this coin is valued at around 5 million pounds. The location where this coin was found is not being revealed to prevent an influx of other metal detectorists. Previous world auction record, established in 2004, was for Britain's first gold penny, struck for King Coenwulf of Mercia (796-821) which sold for £230,000.

We knew that there would be a huge interest, but this surpassed all of our expectations.

This coin face value was worth 6 shilling at issue and circulated between December 1343 to July 1344. The privately owned example is graded PCGS MS-62 and was displayed at the Long Beach Coin, Currency, Stamp & Sports Collectible Expo in February 2018.

Many replicas and fakes exist today.

Edward III was a widely admired knight who was also feared by his enemies as a bold military commander. Much of his reign took place during the Hundred Years War with France, and by 1340 Edward had declared himself also King of France. This was outrageous to the French, and the war continued until it was ended in 1360 by treaty.

Meantime, Edward ruled over a rich country at a time when chivalry was at its height. He held jousting and other tournaments, and he founded the Order of the Garter in the same year this coin was minted, 1344. This chivalric order was officially instituted in 1348, its membership limited to the king and just 24 knights. Its inspiration was the mythical Round Table of King Arthur, at which 300 knights sat with their king, reigning over and protecting England.